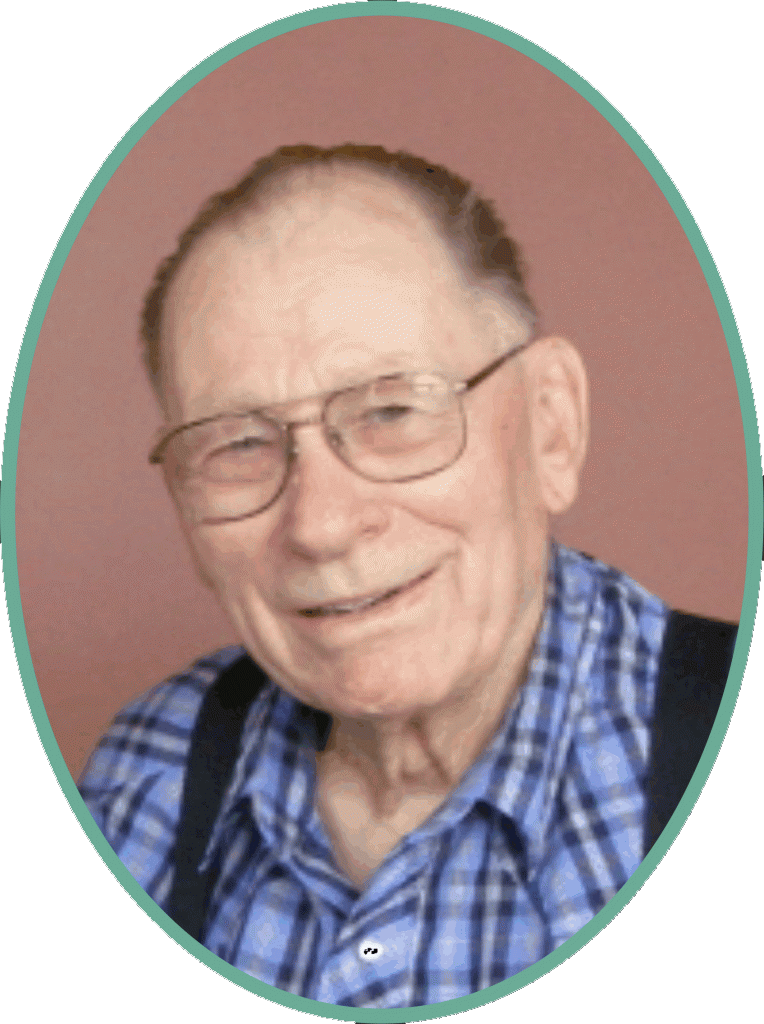 “But he was wounded for our transgressions, he was bruised for our iniquities: the chastisement of our peace was upon him; and with his stripes we are healed.” Isaiah 53:5

BELOVED SON – of Arthur French and Grace (Morris) born March 11th, 1924 in Toronto. He was about 3 years old when his parents came to Muskoka in a covered wagon. His parents had bought the house and property on Stephenson Rd 1 East. You could say that Bert brought technology to his Dad’s farm – or at least he motorized it! He owned his first car – a model T – at age 14.

BELOVED BROTHER – One of 5 children, Bert was a wonderful big brother to his baby sister, Dorothy (Dot) McGill, and to Marion Garrow of Sudbury, Elmer of Florida, and was predeceased by Arthur of Vancouver BC.

BELOVED HUSBAND – of Mildred Annie Clarissa Stevenson, his wife of 64 years, his constant companion, the mother of his children and his copilot. On May 24th, 1945, Bert met a grownup Milly Stevenson. He had seen her at the front of the oneroom schoolhouse, and coincidentally she was born in the house where Bert was raised. At 19, Bert thought she was breathtaking, and he was determined to marry her. On their first date, they stopped at Indian Landing in Port Sydney. They were married on August 10th of that same year, and were happily married for the rest of his life – and moved back into that house on Stephenson Rd 1 East!

BELOVED FATHER – to seven children: Bertram Bernard, Lawrence Arthur Samuel, Marilyn (Mair) Mildred, Faye Annette, Helen Denelda, Daniel James, and Dorothy (Dorrie) Rebecca. His children all felt that they were his favorite because he had a very special relationship with each of them. When his children were growing up, the Saturday night entertainment was going for a drive and letting the kids pick the next turn until we ended up somewhere deep in the forest on a dead end road, then coming home to have homemade fudge and tell his life stories from the rocking chair.

BELOVED GRANDFATHER AND GREAT GRANDFATHER – Bert must have read the passage that says “Go forth and multiply” because family functions complete with grandchildren and great grandchildren were a crowded, happy time which brought him such pleasure. He loved his grandchildren – even let a certain granddaughter put barrettes all through his hair! – and would let them climb all over him, he’d read to them – the same book six times, he’d listen to them prattle, and chuckle at how cute they were.

BELOVED SERVANT – of the Lord. On March 11th, 1955, Bert accepted Jesus Christ as his personal saviour while reading Isaiah chapter 53, verse 5. His trust in God enriched his life from that day onward. He loved to tell the story of how he was saved. His practice was to read the Bible with his wife and family at least once every day of his life since he was saved. As a willing servant of the Lord, he held Sunday School classes in his little silver trailer while building the Trans Canada highway. He helped in the gathering of Christians at the Deer Lake Gospel Hall. His back seat was rarely empty on the way to the Hall.

WORKER AND BUILDER – Life on the farm was all Bert ever wanted, but he spent a few years in a variety of jobs such as logging, machine operating, building construction and highway construction. As long as a motor was involved, he was happy. He loved to talk about his road building experiences with Storms Construction, the “DHO”, and Sealy & Arnill. He also talks about his years at Corning Glass as a stores manager. When his son Larry graduated from Kemptville Agricultural College in 1970, they became partners. The initial intent was to earn enough money through construction jobs to start farming together. Instead, Bert French & Son Limited, and French’s Fine Homes with their fleet of green and white trucks became. The last few years have been spent “running the roads” in his SportTrac for the company – doing banking (and saying hi to the ladies at the bank), picking up permits (and saying hi to the ladies in the building departments), delivering plans, picking up material, anything that LeeAnn asked. He was always amazed at how many nice people there are out there – always so helpful to him!

CAR GUY – or – more accurately – FORD MAN Bert was a “Ford Man” – he made a couple mistakes over the years (notably a
VolksWagon bus that he thought would be good for picking up kids for Sunday School) but the rest of his 104 vehicles showed that he loved Henry Ford and all his inventions. The company trade mark colour is actually Ford’s “Carribean Turquoise” from a 1964 Meteor station wagon. On the occasion of his 75th birthday, instead of a letter from the prime minister of Canada, he received a letter from the President of Ford Motor Canada. (Thanks Dorrie.) With Uncle Dick, he restored 1929 Model AA flat bed Ford pick up truck. You’ll often see it in the Christmas parade with a sign that says: Every house was built by some man, but God is the builder of all things. He also has a 1930 Model A roadster pick up that has been restored with lots of help from Bert Jr. and Tyrone Yakes. He got such pleasure from these “working” days.

THE TRAVELING MAN – Another big part of Bert’s life has been vacations with Milly. They know most of the trails in Algonquin Park, and loved all the Provincial Parks. They had a camper that they towed behind the pick up. It took them a lot of places, including trips to the eastern states with Aunt Helen and Uncle Dick, a visit to Dearborn, Michigan – the home of Henry Ford! – and lots of nature sites and museums. They never stopped learning, and never stopped enjoying their travels together. It may not classify as ‘travel’ but they also enjoyed their trips through the farm on the golf car, with Milly lopping branches as they went along, to keep the trails clear. His other pastime was feeding the birds. They kept a full row of bird feeders in front of their big picture window so they could watch the chickadees, the mourning doves, the finches, woodpeckers and a host of Muskoka’s birds. At Dean’s Hardware, they were always ready when they saw his truck arrive – time to load the week’s groceries for them – in nyger seed!

“…and the time of my departure is at hand. I have fought a good fight, I have finished my course, I have kept the faith:
Henceforth there is laid up for me a crown of righteousness, which the Lord, the righteous judge, shall give me at that day: and not to me only, but unto all them also that love his appearing.” 2 Timothy chapter 4, verses 6 to 8